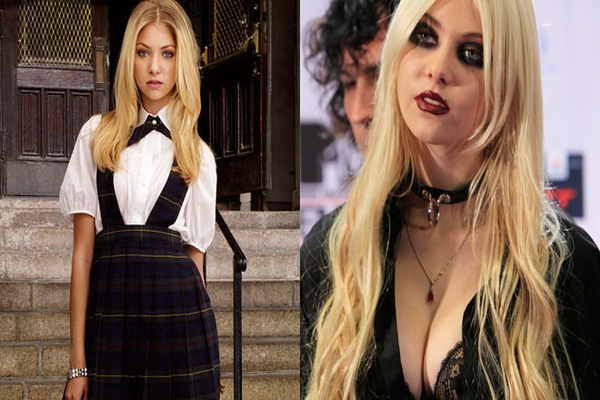 I remember being a teenager, around the age of 15-16 and being all over Gossip Girl. I mean, there was other teenage shows (S/O to 90210) that I was absolutely in love with but GG had something special to offer – a character I could truly relate to – Jenny Humphrey.

I was OBSESSED with Jenny! I don’t know if it’s because she was the outcast little shy girl trying to fit in so badly or if it was how her personal fashion style developed from little good girl to neo beauty punk (which I was living for tbh).

Other than her personality, I definitely looked up to how passionate she was with her fashion work and I was so in love with her relationship with Nate Archibald and him falling in love with her. Seriously – who doesn’t want to be loved by the cutest AND sweetest guy in school. So yeah, Jenny’s character was almost perfect in my eyes and even when she had her downfalls, she was able to somewhat come back from stronger. Also, what kind of teenager realizes that they are becoming an egocentric control maniac Queen B and decides to leave everything behind to stop hurting people they care about and change schools to better themselves? HUH?!!!

It perhaps wasn’t necessarily Jenny that I was so in awe of but maybe simply the interpreter of the character, Taylor Momsen who is known for her role of Cindy Loo Who from The Grinch Who Stole Christmas. Unfortunately, many don’t know that she is also the lead singer of The Pretty Reckless. The band was created after she worked with different producers and eventually met Kato Khandwala – a rock producer – who helped her form the band and create music that she could relate to. Since creating the band, Momsen stopped acting with the exception of coming back for the Gossip Girl series finale episode. (Here’s their first music video, the iconic ‘Make Me Wanna Die’)

Taylor Momsen has been a huge influence on me when it comes to make up, hair style and even a bit of fashion (and honestly, she still kinda is). I remember walking down the high school halls with a heavy black eye shadow make up (which I’m kinda thinking of bringing back) and hair styled with bangs like she had in the second season of Gossip Girl.

My hair when I was 16. You can see the influence that Momsen had on me!

So much hair! The emo teenage dream<3

So it was just natural for me to become obsessed with The Pretty Reckless and eventually becoming some kind of neo emo/punk cliché myself. Since I loved this type of music so much (emo/punk/alternative/screamo/rock), it was just a matter of time until I experienced what I believe was the official baptization of my Rock and Roll persona – The Warped Tour.

*side note: I was already some kind of emo in the last few months of my 15th year but after The Warped Tour I really started experiencing with the neo punk style (and still do now but in a more chic way I guess) SIDE NOTE OVER – NOW BACK TO THE WARPED TOUR!*

AND BOY WAS IT SPECTACULAR!

So other the fact that I got to see most of my favourite bands live (SUM 41, Bring Me The Horizon, We The Kings to name a few) I got to not only see The Pretty Reckless giving a sick performance but also I GOT TO MEET HER JENNY FREAKIN’ HUMPHREY!!! & I have a picture to prove it 😊

This picture is so funny cause it’s such an ugly one and I also showed it to my best friend recently and she pointed out how it looks Photoshoped WHICH I SWEAR IT’S NOT!

Btw the only reason my hair looks like this is because it was a crazy hot day and my emo friends had the brilliant idea to wet our hair – their hair came back straight from it but I guess I forgot for a second that my natural hair is curly aka TOTALLY UNCOOL DUH OMG MOM IT’S NOT A PHASE IT’S WHO I AM KTHXBYE. *ok teenage crisis over*

From what I remember though, Momsen was really nice and open to meet all the fans, which is something that for some reason surprised me because of her character on screen.

I do re-call saying something with a very high-pitched voice and telling her something like ‘I love your band, you’re amazing, thanks for meeting us’!!! Lol but seriously, I was SO happy to meet her! And it’s always fun to meet some of your heroes or idols and they don’t deceive you. Go Taylor go!

I hope to meet her again and perhaps take a better picture.