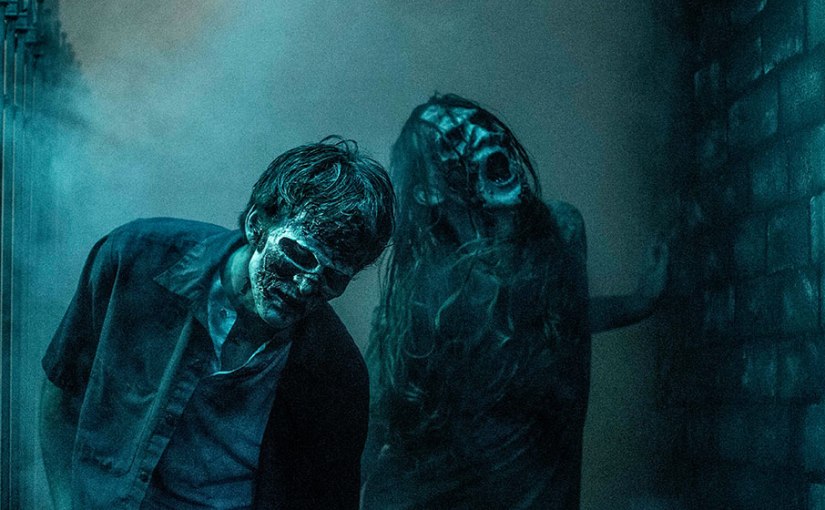 Halloween is around the corner and to be honest, I haven’t done anything Halloween-esque yet. I mean, it makes sense because Halloween is more than a week away but still, for someone as obsessed with Halloween as me, something had to be done.

So last night I went with my friend Tom to Canada’s Wonderland’s Halloween Haunt. I was low key expecting something like Montreal’s La Ronde Fright Fest (small and predictable) but to my surprise, Halloween Haunt was huge and somewhat predictable!

I’m usually the type of person who’s scared of her own shadow but lately I’ve actually been watching a lot of scary stuff (I mean, hello Haunting of Hill House and The Conjuring 2). Ok, these aren’t too scary but they are for me and with Hill House being the latest scary show on the Netflix platform, you know it was meant to be the most thrilling of its genre this season. So what I”m trying to say is that I believe that I’m over my fear of horror movies (except The Ring – I will never watch The Ring). With that being said, I was super excited to try out the haunted houses that Canada’s Wonderland had to offer. I’ve heard some great things about them and I was looking forward to try them out finally! And guess what, we did them all.

Now, let me break it down to you. As scary looking these haunted houses can seem, the fact that we enter them in groups takes away the scary component of the adventure. Hearing other people scream or seeing them being scared right in front of your eyes as you see the actors jumping on them makes the whole experience laughable and not scary at all. I mean, definitely a part of me was grateful about the fact that we were going into groups but isn’t the purpose of haunted houses to make you feel alone and scared?

The only time I actually felt this way was in two different haunted houses: Blackout and Spirit Manor. Blackout was a completely dark maze and I don’t think there was any monsters but just the idea of not knowing where you’re going was scary. Secondly, the Spirit Manor was probably the thing that scared me the most simply because of what I’ve been watching on Netflix lately. The idea of huge mansions turning people into crazy human beings is kinda believable in my opinion. I mean, obviously the manor was not scary at all but the actors got me some good few jump scares there and there.

Ok, these were legendary! Scar Zones are basically paths in the park with zombies, clowns etc. They weren’t scary but the actors were pretty fun and I loved that they were breaking out of roles to help people find their ways in Canada’s Wonderland. There was one actor in particular dressed as a super spooky clown who was helping a group of young kids. Now, you guys must know that I hate clowns. I used to be scared of them, now I only hate them. So, I thought of a funny thing that I could post on my Instagram story, a selfie with a clown! I went to that creepy clown and asked him if I could get take a picture with him, I took it and added the caption “How do I face my fears? I take selfies with them!” Tbh I thought it was pretty clever.. No? Ok.

Well, here in Canada when we get closer to the end of October the temperature drops very low, which makes me wonder – why did I agree to go to Canada’s Wonderland when it was 0 degrees.. Walking around wasn’t too bad but going on a ride when it’s freezing outside was super intense! I wasn’t scared of the drop, I was just scared that I was gonna freeze once reaching to the top of the ride.

Did you visit Canada’s Wonderland this year yet? Do you have any recommendations for haunted houses around Toronto?